What’s a belt tensioner? Called the serpentine, or ‘snakes’ as a nickname, the belt tensioner has a really important role to play in ensuring your car functions properly. Of course, you probably know that the manufacturers didn’t add it in for kicks! The purpose of the belt tensioner is to apply a certain amount of regulated pressure to the accessory belt.

The accessory belt, in turn, works to spin a couple of pulleys. This includes the alternator pulley, power steering pulley, AC compressor pulley, and others.

These accessories are vital to the performance and functioning of your car. Your AC will likely malfunction, as well as the steering capabilities if these operations aren’t in place.

Is it safe to drive with a bad belt tensioner?

It is very unsafe to drive your car if your belt tensioner is not working properly. Without enough tension on the belt, the accessories can get damaged as the belt slips. It could produce too much heat which can cause further damage to surrounding parts inside the car.

Instead of putting yourself at risk, as well as creating the possibility of expensive accessory replacement parts in the future, we recommend that you simply change out your old belt tensioner for a new one! Replacement belt tensioners are inexpensive, durable, and easy to source. 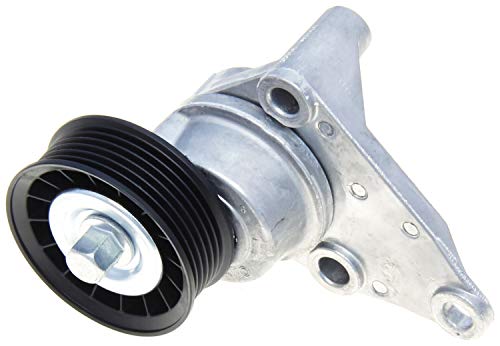 What happens if I drive with a bad belt tensioner?

The belt tensioner has an important job of providing tension to the belt. It is this tension that helps the belt to spin and power up the accessories. These accessory pulleys have the job of working with the respective car parts.

Once the belt tensioner starts messing with the belt, there will likely be a loud clanking noise as the accessory pulleys crash with each other! There can be a lot of heat that is generated from this encounter, as well as serious damage is done to all of the parts involved.

One of the most serious problems that can occur with less tension on your belt is that the alternator pulley can stop working.

This means that the alternator will no longer be switched on and supply equal and opposite energy to the battery. The battery, as a result, will malfunction. It is likely that you won’t be able to start the car (if you’re lucky) but the battery could very well explode in such a case.

Other problems include not being able to switch on the AC. The AC also has fluids and operations that need to be in motion and running smoothly and a sudden halt can cause complications.

That’s why we strongly caution you not to underestimate the belt tensioner as it can have far-reaching effects on the performance of your car.

How do I know if my Belt Tensioner has gone bad?

Now that you’ve realized how crucial the role of the belt tensioner is, how do you go about determining if it has indeed gone bad or if you’re facing a completely different issue on your hands?

Here are some of the most common symptoms that your belt tensioner isn’t working like it’s supposed to. If you notice any of these symptoms, stop driving at once and try to investigate the issue to prevent further damage and dangerous outcomes.

1. Serpentine Belt Slipping When You Start the Car

You should check it immediately. You can do this by switching off the car and then waiting for a few moments before you decide to take a look at the serpentine belt. Once you do, try to move the belt manually to see if the motion is happening smoothly. Check the tensioner as well as the pulley. If everything seems to be moving without any obvious noises, then it might be completely fine.

However, if there is a loud screeching, clanking, or grating noise as you try to do this, then the belt tensioner is probably to blame and has gone bad.

Another reason why you could be facing this issue is that the hydraulic tensioner isn’t working properly. There shouldn’t be any oil leaks if it’s working properly. Oil leaks are relatively easy to check for, as you will be able to easily locate them. Even if you can’t see the oil itself, the grease generally attracts a lot of dirt to stick on it, making the leak trail much more visible.

If there is an oil leak from the hydraulic tensioner, then it’s likely that you need to replace your tensioner!

Like we mentioned earlier, a loud noise is one of the easiest ways to tell that there’s something wrong with your belt tensioner. It’s almost as if the belt tensioner is upset and letting you know that you need to change it!

Usually, the noise is being produced because of the loose bearing inside the tensioner. When this bearing starts getting loose and moving about, the growling noise is produced. This is a warning noise that your tensioner is starting to act up, or has already gone bad.

Naturally, as the belt tensioner stops working, so does the accessory belt and all the accessory pulleys that are located on it. As a result, the AC will not switch on. This is one of the first signs.

But most significantly, the battery light will switch on since the alternator is off and not working (thanks to the alternator pulley that was also located on the accessory serpentine belt). If your battery light switches on, then you should probably stop driving and inspect your belt tensioner!

There’s no doubt about it: you shouldn’t drive with a bad belt tensioner under any circumstances. It’s dangerous for you and your car and can cause some serious damage to both. It’s easy to check if the belt tensioner has gone bad by moving it manually and looking out for any rough movement and loud noises.
It’s also quite inexpensive to replace it, so there is no good reason why you should put off replacing this extremely important car part. Stay safe!